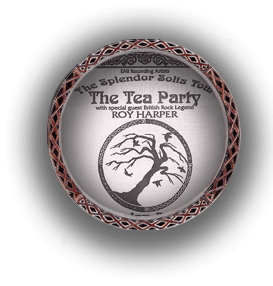 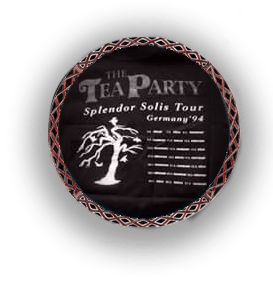 This website is part of the TEA PARTY ARCHIVES project. This page celebrates the Tea Party’s iconic album ‘Splendor Solis’, by presenting photos, videos and articles from that period, as well as giving background info to the album and it’s songs. This is a non-profit fan-driven project – the band is not involved in this website. Though: everything was collected and researched with great care and attention to detail. Should errors have slipped in nevertheless, we would be pleased about a note!

Windsor’s Tea Party have been bringing their combination of rock, blue and spiritual pschedelia(sic) to the world by way of cross-Canada tour with Blind Melon followed by an overseas Australian jaunt. I was able to catch up with Stuart Chatwood, the bass player for the group, the day after their arrival back in Canada from the Land Down Under. Here’s how our conversation went…..

Andrea: When was the band, as it sits now, formed?

Stuart: About three years ago. It actually started as a lark.

S: Well. we(Jeff Martin, Jeff Burrows and myself) were living in Toronto and were asked to play a pub show in our hometown of Windsor. The owner of this club asked us to form a joke band for a show. Martin and I were in another band at the time that was falling apart. It was to the point where we all needed to drink a bunch of beers in order to just get along with each other. When we decided to practice for this joke band we ended up spending about eight hours rehearsing! We couldn’t believe just how well we all got it together. We jammed on a Saturday and on that Sunday, our bass player called to say the drummer was quitting. Everything was falling apart, yet it seemed like a good omen. That’s when we decided to do this three piece band(Martin, Burrows, Chatwood) for real, not just as a joke.

A: So is that when you became The Tea Party?

S: Not exactly, I mean we didn’t call ourselves that yet, we just knew we wanted to play together. So, we did club dates in and around Toronto and we eventually decided to record an independent CD. It was released in June(1991) and we started sending it out everywhere, while all the while playing shows here, there and everywhere. We started to notice that more and more people were coming out to see us. First 20 people, then 80, then 120 and by the time we played our seventh or eighth show, we sold out a place in London called Call The Office.

A: How did the record deal come about?

S: Initially we sent our cd out to record companies just to see what would happen. We got a lot of rejections until we signed a publishing deal with Warner and all of a sudden companies from all over were interested in us. I remember, we saw three record companies in one week. The first told us we were dreaming, that we would never find a company to go along with us with all the demands we were asking.

A: I suppose you showed them, huh?

S: Yeah, but at the time, we left that office feeling pretty down. Anyhow, the second company we saw told us that they wanted to work with us, on our terms. They said we could record five songs and they would foot the bill. If that worked out, we would do the whole album.

A: And obviously it turned out great.

S: Yeah, we were able to do the album the way we had envisioned doing it from the start … it worked out well.

A: I won’t go asking about your influences or aspirations and all that stuff, but I am curious about one thing …

A: In one of your videos, I notice there is a lot of reference made to the native culture. Is that something that you are interested in or did it just sort of work out that way?

S: Well, we are all very disinterested in organized kinds of religion so I guess we are just into exploring different ideas. We’re not weird or anything, we’re just searching for something different, and the native ideas seem a natural route. The connection between the seasons and the earth and us as humans, I find that very interesting … we all do. Oh, hey, do you know where we just got back from?

A: Yeah, Australia, I was going to ask you … how did that go?

S: It went pretty good. The album was released there the second week of November and we flew down Christmas Eve. not really knowing what to expect. Turned out, there is a big alternative station down there called Triple J and they broadcast all around Australia. They picked up the single Save Me and they played it first once a day, then twice then we were in heavy rotation, which lead to more promotion, so by the time we got there people actually knew of us.

A: What parts of Australia were you at?

S: We played mostly between Sydney and Melbourne. On the last night there we played an unannounced show in Sydney. We would have been happy if 100 people showed, so you can imagine our surprise when we got there and there were 400 people waiting for us to go on.

A: Wow, that’s terrific that you had that kind of interest there.

S: We were pretty happy about it. When we were flying back to Canada, the stewardess looked at us and said, “You guys are in a band, aren’t you?” We were all set to go into our routine of,”We’re The Tea Party and you’ve probably never heard of us, we’re from Canada…” and then she goes, “The Tea Party! I love you guys!” And she was from the other side of Australia.

A: So what’s next on the agenda?

S: We flew in yesterday and we play a few shows around Ontario. Then we fly to Halifax and St. John because that’s one part of the country we haven’t really concentrated on and we don’t want to leave them out. Prior to Australia we did a cross-Canada tour with Blind Melon that took us West of Ottawa so now we go east.If you didn’t have a chance to see the Tea Party when they performed a couple of months back in Barrie … tough luck! It looks as though you’ll have a mighty long wait before they return to our neck of the woods again. In the meantime, you can indulge in their exotic sounds which are nicely nestled in a bed of rock music on their Splendor Solis CD. Grab it, it’s a keeper.

Toronto, Canada’s The Tea Party actually sound like Jim Morrison singing for Led Zeppelin in their most exotic middle-eastern moments, and vocalist/guitarist Jeff Martin even looks like the Lizard King. Splendor Solis, their 1993 debut was a smash in Canada with sales of a million copies – pretty impressive when one remembers that due to that country’s small population, platinum status is awarded at 250,000 units. First track “The River” sets the tone with its esoteric lyrics, eastern-influenced guitar licks and tribal drumming. After a beautiful acoustic guitar solo called “Winter Solstice” we arrive at the album’s piece de resistance: “Save Me,” which slowly builds trance-like for over six minutes. Overall, this is a fine, if slightly pretentious album, and the band would improve upon their formula with their follow-up.